Skip to Main Content
It looks like you're using Internet Explorer 11 or older. This website works best with modern browsers such as the latest versions of Chrome, Firefox, Safari, and Edge. If you continue with this browser, you may see unexpected results.

About the John Newbery Medal

The Newbery Medal is awarded annually by the Association for Library Service to Children, a division of the American Library Association, to the author of the most distinguished contribution to American literature for children.

How the Newbery Medal Came to Be

The Newbery Medal is awarded annually by the American Library Association for the most distinguished American children's book published the previous year. On June 22, 1921, Frederic G. Melcher proposed the award to the American Library Association meeting of the Children's Librarians' Section and suggested that it be named for the eighteenth-century English bookseller John Newbery. The idea was enthusiastically accepted by the children's librarians, and Melcher's official proposal was approved by the ALA Executive Board in 1922. In Melcher's formal agreement with the board, the purpose of the Newbery Medal was stated as follows: "To encourage original creative work in the field of books for children. To emphasize to the public that contributions to the literature for children deserve similar recognition to poetry, plays, or novels. To give those librarians, who make it their life work to serve children's reading interests, an opportunity to encourage good writing in this field."

From the beginning of the awarding of the Newbery and Caldecott Medals, committees could, and usually did, cite other books as worthy of attention. Such books were referred to as Newbery or Caldecott "runners-up." In 1971 the term "runners-up" was changed to "honor books." The new terminology was made retroactive so that all former runners-up are now referred to as Newbery or Caldecott Honor Books.

Giving Credit Where Credit is Due

This guide is possible due to the hard work of:

Thank you for allowing us to copy and edit for our purposes. 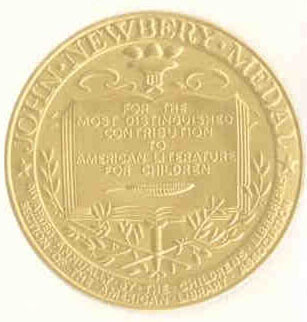